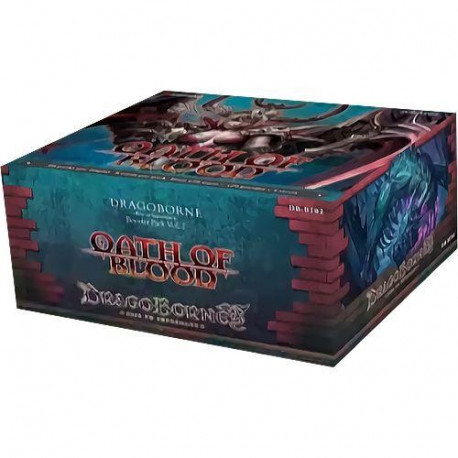 One [Oath of Blood] display containing 20 packs of 8 cards, of which 1 or possibly more cards will be of R rarity or above!

This item is expected to be in stock on the 10.11.2017. Orders containing this item will not be shipped before the official release date. Special preorder price until release!

War has begun, one in which every nation has a stake. And in order to gain an advantage, alliances have been formed; each participant working towards their own goals. Some move with a purpose born of strong belief, some based on personal whim. The trick is to figure out who is out to get you killed.

Colors included in [Oath of Blood]:

The second Dragoborne booster [Oath of Blood] features cards from all of the five colors, allowing players to build all sorts of decks. One [Oath of Blood] display containing 20 packs of 8 cards, of which 1 or possibly more cards will be of R rarity or above!

Alliances have forged and battle lines drawn. [Oath of Blood] brings more cross-color synergy for you to upgrade your deck!

[Oath of Blood] also features new cards that you can use as the core of a deck, and also expands on your ability to manipulate dice!

- Parallel holo versions of all normal cards will also be randomly inserted!!

- At least 1 card in every pack will definitely be an R or above card!!

- 5 banner cards and 5 dice will be included in each display!! [Limited to first edition]