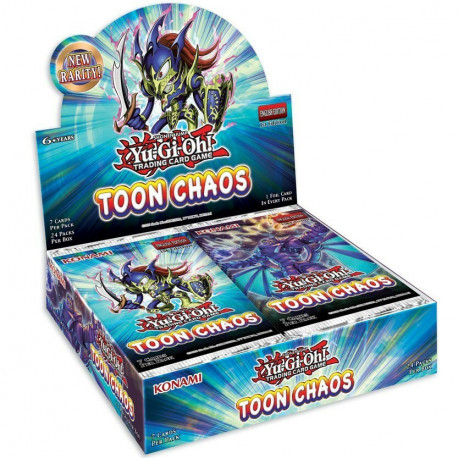 This item is expected to be in stock on the 31.08.2020. Orders containing this item will not be shipped before the official release date. Special preorder price until release!
Due to the current situation with the COVID-19 virus, we cannot guarantee a delivery on the release date. Delivery delays are possible.

New orders of this article/language combination will be shipped with the second wave of Ikoria pre-orders. Estimated delivery around the 29.05.
Due to the current situation with the COVID-19 virus, we cannot guarantee a delivery on the release date. Delivery delays are possible.

The very first "Chaos" monsters were used by Yugi in his Duels against Mai and Pegasus, but the new Toon Black Luster Soldier has a lot more in common with the upgraded Envoy of the Beginning model from Invasion of Chaos – complete with the ability to banish your opponent's monsters! In addition to this towering titan of toonacity, Toon Chaos has more new cards for your Toon Decks to vastly increase their speed and stability! Having trouble tuning in to the Toons you were looking for? Check out the new Spell Cards in Toon Chaos that let you channel surf until you find the Toons you want, right out of your Deck!

For the ever-popular Chaos theme, Toon Chaos also introduces new Chaos versions of older monsters, like the Chaos Creator that can simultaneously Special Summon a banished monster and return other banished monsters to the Deck! Toon Chaos has 3 new Chaos monsters for Decks full of LIGHT and DARK monsters, including a boss monster that fits perfectly into the "Dream Mirror" strategy from Rising Rampage and Chaos Impact, plus new cards to help you find those monsters and Summon them. Let the chaos commence!

In addition, you can prepare for the Rise of the Duelist booster set with a pair of fiery new Noble Knights and get ready for the biggest competitions of the Summer with another chance to pick up Pot of Extravagance! Toon Chaos will also debut the long requested "Collector's Rare" rarity for the first time outside of Asia. Fifteen cards will appear in a glorious new form you'll have to see to believe!