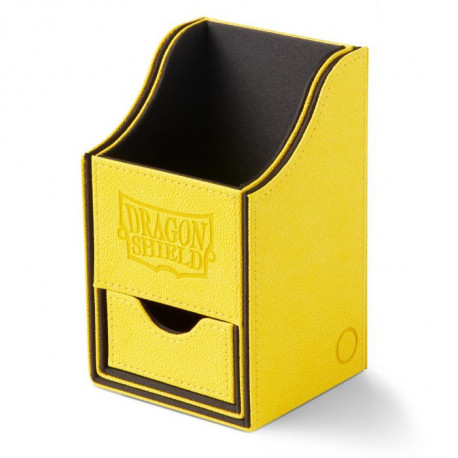 The Dragon Shield’s Nest and Nest+ Deck Boxes offer high-end deck protection with a simple design and strong magnetic seal. Each Nest and Nest+ has a black exterior and classy colored interior fabric. Nest+ Deck Boxes also include a removable dice tray. Piece all 8 product packages together to discover different parts of the story, “Saturion Ascendant,” to discover the origins of the Nest.

As safe as a dragon’s nest.

Dark light poured from his open eyes and mouth as a black egg rose in the center of his chest. Black veins rippled out from it until they covered his nearly destroyed body.

Countless souls seeped from it in a torrent of ghostly screams. They stitched together to form a body.

Its hatred for Saturion rolled off him in heated waves.

Any other time, any other place, Rhipodon would have tried to kill his imprisoner.

But the golden dragon below, the guardian of the Nest, demanded his attention.