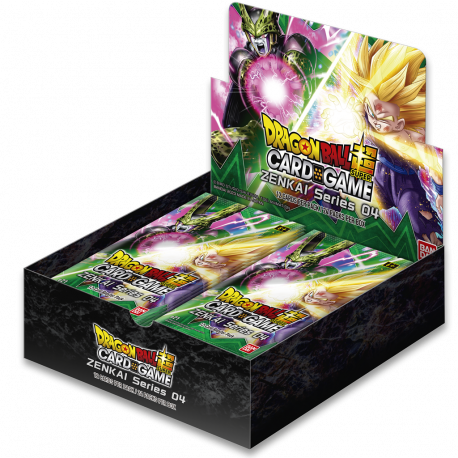 This item is expected to be in stock on the 16.06.2023. Orders containing this item will not be shipped before the official release date. Special preorder price until release!

EXPANSION OF SET 03’S "Z-STACK" KEYWORD!
The "Z-Stack" keyword introduced in Set 03 expands! Stack Z-Cards for great gameplay effects! Stack cards and recreate transformation and parasite scenes from Dragon Ball history! Players will want to have the full 7 cards in their Z-Deck for optimal gameplay and deck-building fun!

CHARACTERS FROM VARIOUS AGES THEMED AROUND "WILD RESURGENCE"!
A lineup of warriors who have come back to life in the midst of battle!
In addition to classic characters such as Perfect Cell and Golden Frieza, Super Uub joins the fray as a leader to recreate his fusion with Majin Buu!

THREE SECRET RARES - INCLUDING CANON CHARACTERS!
Set 04 contains three Secret Rare cards, including some with familiar characters
beloved by all Dragon Ball fans! Players will have their wish granted in Set 04!

A DBSCG FIRST - GOD RARE WITH A NEW STYLE ILLUSTRATION!
One of Dragon Ball’s most famous scenes is here as a God Rare featuring a new illustration style that will excite all fans of the original! You won’t want to miss it!