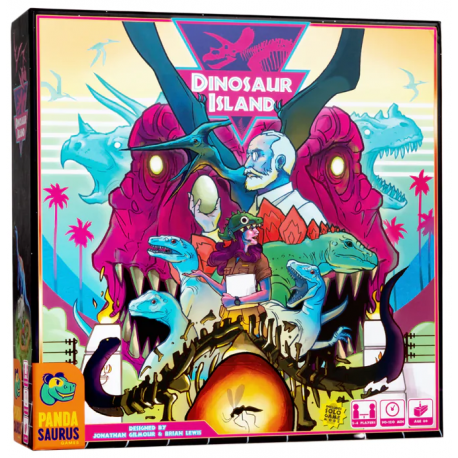 Dinosaur Island is a radical worker placement game from designers Jon Gilmour (Dead of Winter) and Brian Lewis where players compete to open the best Dinosaur Island Theme Park they can.  Find out why Dinosaur Island has sold more than 50,000 copies and been nominated for more than 10 Game of the Year awards!

Several years ago, scientists discovered a way to clone dinosaurs from viable DNA preserved within the fossil record. After a few mishaps along the way, the process has stabilized. Today, it's the museums that have gone practically extinct, as shrewd investors have turned those initial dinosaur sanctuaries into bustling theme parks, true meccas for dino fans the world over.

In Dinosaur Island, each player takes on the role of a park manager at one of these premier destinations. You've been handed the reins to a burgeoning operation - bring the fantastic creatures of the Jurassic, Triassic, and Cretaceous periods forward into the modern day. Early retirement is yours if you can make your park bigger and better than the competition!

It won't be a walk in the park, though. You will need to hire the right personnel, beat your competitors to perfecting the hottest dino recipes, and gamble on which attractions will draw the most visitors. And it'll all come crashing down if your security precautions aren't tight enough to keep your unruly dino population under control. Welcome to Dinosaur Island.