> Magic Sealed Products>The Art of Magic>Magic: The Gathering - Rise of the Gatewatch: A Visual History

Due to the large volume of orders this week, please note that your order may be slightly delayed (1-2 business days). Thank you for shopping with us! 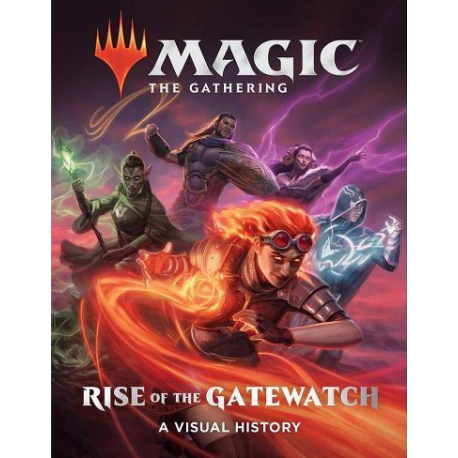 Magic: The Gathering - Rise of the Gatewatch: A Visual History

A visual history of Magic: The Gathering's Gatewatch Mythology

Over the course of its 25-year history, Magic: The Gathering—the world’s first and most popular trading card game—has redefined the fantasy genre through its exploration of diverse, fantastic worlds. And traversing those worlds are Planeswalkers, heroes who have sworn to defend the Multiverse from harm. Magic: The Gathering: Rise of the Gatewatch is a visual history and celebration of Magic’s first team of Planeswalkers—Jace Beleren, Ajani Goldmane, Gideon Jura, Kaya, Chandra Nalaar, Nissa Revane, Liliana Vess, and Teferi. The Gatewatch’s character histories, from their origins through their final confrontation with Nicol Bolas, are presented here via the very best card, packaging, and convention-exclusive artwork, all of it reproduced together here for the first time, some seen for the first time outside of the card frame. Rise of the Gatewatch is a giftable visual reference guide sure to appeal to new and longtime Magic fans alike.

Wizards of the Coast, a subsidiary of Hasbro, is an American publisher of collectible trading card games and board games. Their headquarters are in Renton, Washington.

Jenna Helland is game designer for Wizards of the Coast in Renton, Washington. Helland is the author of The Godsend and The August 5.