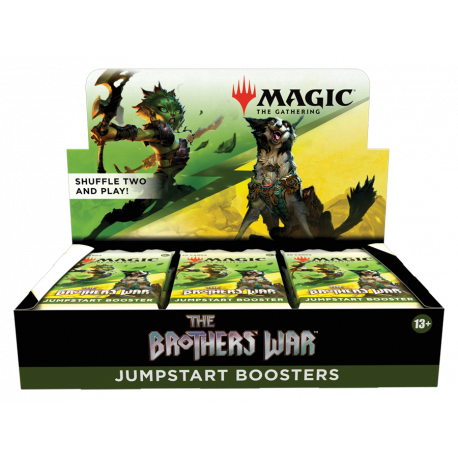 This item is expected to be in stock on the 18.11.2022. Orders containing this item will not be shipped before the official release date. Special preorder price until release!
Select priority shipping when placing your order to receive this item on its release date! (subject to delivery from our suppliers)

The Brothers’ War Jumpstart Booster Box contains 18 The Brothers’ War Jumpstart Boosters. Each booster has a theme. Just grab two packs and shuffle them together for wild combos and a unique gameplay experience that’s great for a quick, casual game, for older players looking to jump back in, or for giving new players a fun, simple way to learn the game.

The Brothers’ War Jumpstart Boosters contain 20 Magic cards (including all the lands you need to play). In every pack, you’ll find 2 Rare cards, 1 of which may be a Mythic Rare, and 2 Land cards that are Traditional Foil.

If you’re looking to maximize your mash-up, The Brothers’ War Jumpstart Boosters are compatible with all other Jumpstart products.