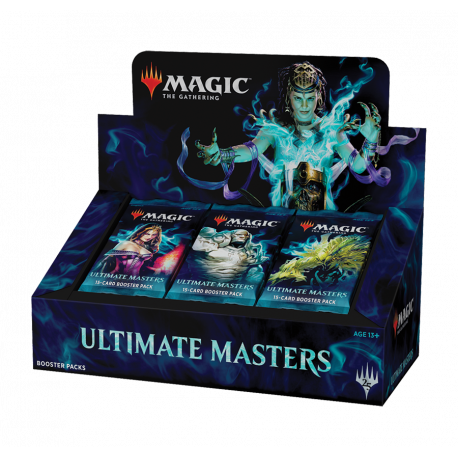 This item is expected to be in stock on the 07.12.2018. Orders containing this item will not be shipped before the official release date. Special preorder price until release!
Due to the current situation with the COVID-19 virus, we cannot guarantee a delivery on the release date. Delivery delays are possible.

New orders of this article/language combination will be shipped with the second wave of Ikoria pre-orders. Estimated delivery around the 29.05.
Due to the current situation with the COVID-19 virus, we cannot guarantee a delivery on the release date. Delivery delays are possible.

Ultimate Masters (UMA) brings a host of powerful, sought-after cards—including some of the greatest cards from throughout Magic’s history.

It's the last Masters set for the foreseeable future, and we're sending the series off with a bang: it’s stuffed with iconic cards, including special box toppers.

The box topper card has a special frame, and its own custom flowwrap. Box toppers include every mythic rare in the set, many of the rares, and two uncommons. (Kitchen Finks and Eternal Witness.)

24 packs per box. 15 randomly inserted cards per booster pack, including 1 premium card in every pack.