Due to the large volume of orders this week, please note that your order may be slightly delayed (1-2 business days). Thank you for shopping with us! 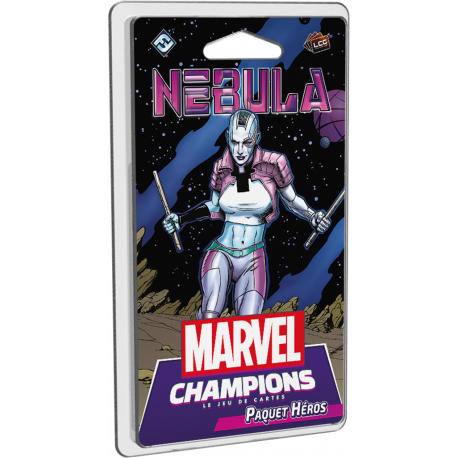 Created by Thanos to be the perfect killing machine, Nebula broke free from her tyrannical father to become a feared space-pirate. But when the Mad Titan threatened all life in the universe, she joined forces with the Guardians of the Galaxy to stop him. Though she may have a checkered past, Nebula is ready to prove that she can be a hero too.

As a sometimes-friend, sometimes-enemy of the Guardians of the Galaxy, Nebula blitzes into action in this expansion pack, which introduces her as a brand-new playable hero, along with her fifteen signature cards. With a pre-built Justice deck ready to go, you’ll be ready to try out Nebula’s technical gameplay from the moment you open the box. With a versatile range of abilities and the potential for some powerful combos, Nebula is a dangerous hero that should never be underestimated!