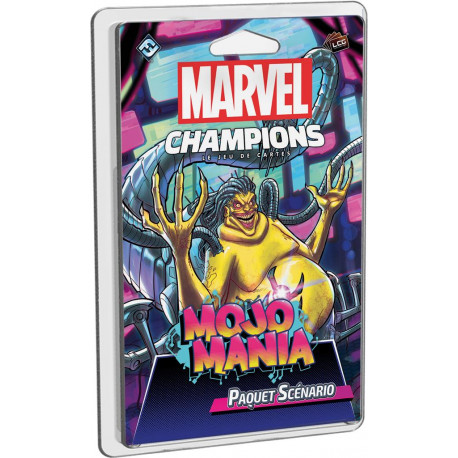 Welcome, one and all, to the marvelous and magnificent Mojoverse, a terrifically televised realm of nonstop entertainment and jaw-dropping drama. A bunch of upstart heroes think they can triumph over the trials before them, but will they actually manage to make a scene? Stay tuned to find out!

In the MojoMania Scenario Pack, players face off against Mojo and his minions in three distinct scenarios, each of which can be played standalone or in order as a three-part mini-campaign. Square up against MaGog in the Mojo-seum, chase Spiral through the Mojoverse and convince her to help you, then take on Mojo himself. This scenario pack also includes six modular encounter sets, each themed after a different genre of television and all of which can be used to enhance any game of Marvel Champions: The Card Game.

For players looking to challenge themselves with a new foe, look no further than the MojoMania Scenario Pack! With 78 cards of televised mayhem, this pack is a must-have for any Marvel Champions fan.

Not a standalone product. The Marvel Champions: The Card Game core set is required to play.